The first few months of dating a new person are exciting and fresh. 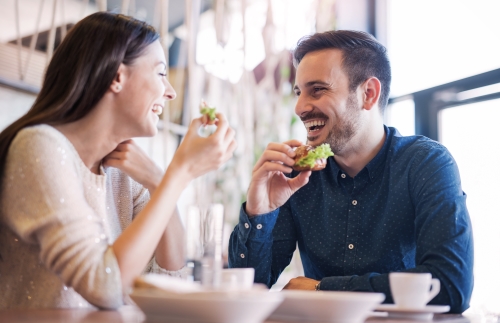 Getting to know them and revealing who you are at the same time is what will help the relationship evolve and get to that next level. During those first few months of dating, you’re most likely spending a lot of time with that one special person, having conversations about family, work, their past, their goals and everything else you’d like to know about them.

But as you get to know them, you realize that you’re not the person you thought you were when you first got into the relationship or maybe he tricked you into doing something you never thought you would. It happens to the best of women who get so wrapped up in the new relationship that they can’t see straight. Don’t be that woman and know these tricks and traps to avoid when dating a new man:

A huge trick you need to avoid as a woman is trying to change the guy you’re just dating. You know he’s bad for you or that there’s something you can’t tolerate about him, yet continue the relationship because you think you can change him. No one can change anyone. They have to change themselves. So don’t go into the relationship thinking you’ll be able to change anything about them. It’s a trap of your own making. You either take him or you don’t, that’s it. There’s no thinking you’ll go into the relationship and mold him into something you want. You might be able to suggest things and make him want to change for himself, but you won’t change him.

Stop feeling like you’re a failure in your new relationship when something doesn’t work. You’re not a failure. Things happen and they do so for a reason. Don’t start to feel as if you’re not loveable or that you’re a failure in love. If things don’t work out in the beginning with your new man, don’t automatically write yourself off as a failure. Learn from it and practice new methods and ideas in your next relationship.

You are good enough for them so stop thinking that you’re not. Don’t feel as if you need to bend to their every whim for them to love you. Don’t worry that he’ll find out who you really are and want to live. Instead have confidence in yourself and love yourself. He breaks up for you for anything, don’t think it’s your fault. You are loveable and are worthy of his love without having to feel as if you’re walking on eggshells.

Things are up in the air in new relationships, but just because you don’t know what will happen in the future doesn’t mean you should reject him before he can do it to you. Don’t feel as if you don’t deserve this relationship with your new guy. Accept that you can be loved and you’re not going to ruin it.

Men aren’t mind readers, so make sure that you always communicate what you want from him. Don’t expect him to read your mind, so know what you want and communicate that clearly to him. Many women struggle with this in new relationships, so don’t fall into this trap!

Although you might want to spend every waking moment with your new guy, you shouldn’t! Continue to have the life you had before you met him. Falling too hard for him and dropping everything you used to love could be a problem. Don’t lose yourself just because you’re dating a new guy.

In a new relationship, you’re both still trying to get to know each other, so you generally tell each other everything. But the moment he starts to lie to you about something, stop him in his tracks and talk to him about it or he’s not worth it. Dishonesty should be a deal breaker for every woman, so don’t put up with it! This is especially true of his past. Finding out if they’ve ever been in trouble with the law will help you determine what sort of person they are. But if you don’t want to ask them, you can always take matters into your own hands and run a background search on them. There’s no shame in running a background search since it’s important to know if the person you’re dating is legit or not.

Don’t settle for his lack of ambition. While it may be okay in the beginning, you’ll start to get bored of him once you realize that he has no goals. His lack of ambition will start to get on your nerves and you’ll start fighting about it. You’ll try to push some goals on him and try to change him and he won’t bulge. So don’t fall for this trap and get out while you still can!

If he has excess baggage, you better believe that he’s going to bring it into your newly formed relationship. Some guys have their stuff together, while some don’t and they let their excess baggage from previous relationships get in the way of their new one.

Ladies, dating a new guy can be exciting. Just don’t get caught up in these traps or tricks and you’ll have a great relationship!